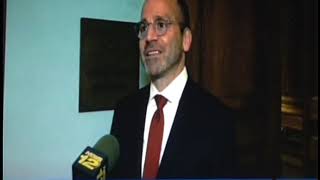 They Did It! 40 Students in Rising Ground Family Foster Care Program Graduate

In what is being described as an "academic milestone," 40 students in Rising Ground's Family Foster Care Program have overcome challenged and have moved up or graduated this year. A special event was held at Brooklyn Borough Hall on June 28th where children and their foster families celebrated the achievement, which was made even sweeter because, according to the National Foster Youth Institute, more than 40% of school-aged children in foster care have academic difficulties.
Harrison Edwards

We love stories like this one! We’ve been working with our client Rising Ground to put a face to the hugely successful Warm Coats and Warm Hearts Coat Drive, which collects and donates winter coats to families who can’t afford to buy their own. The drive is sponsored by Burlington, Delivering Good, and GMA, and they wanted to feature one of those families on the show. The call went out to all of the coat drive’s community partners—527 of them nationwide! Rising Ground was one
Harrison Edwards

Rising Ground, one of New York's fastest-growing human services organizations has opened a new residence in the South Bronx for homeless and runaway teenage girls. The round-the-clock residential program can accommodate up to 20 youth, and uses a holistic approach to promote their empowerment and independence, as they support each other in a group setting. Rising Ground social workers and case planners help the girls find employment and internships, enroll in school, and teac
Harrison Edwards

It was a big weekend at Rising Ground! RG's Preventive Services program hosted a community barbecue and backpack drive in the Bronx, and New York delivered! Over 700 backpacks were collected and donated this year, doubling 2017's efforts, and putting plenty of smiles on the faces of bright and energetic children. The community's generosity didn't stop there. Rising Ground reports that a record number of school supplies were donated as well! Companies like Hall Capital, Oath/
Harrison Edwards

Jose Jarra, Board Chair, Rising Ground, at the New York Stock Exchange during 'Rising Ground Day.' Two of New York’s leading human service organizations announced that they are integrating operations. Edwin Gould Services for Children and Families will become a subsidiary of Rising Ground, a 187-year-old organization that currently operates in the Bronx, Manhattan, Brooklyn, and Westchester. Henceforth, both organizations will operate under one uniform set of policies and pra
Bob Knight

The Story We Can't Tell

The story of migrant children begin separated from their parents at the U.S. border has been the leading international story for nearly a month. In June, when it was made public that Rising Ground, one of New York's most respected human services organizations was caring for unaccompanied migrant children, a steady influx of queries from elected leaders. neighbors, activist groups, and the general public began rolling in. Organizations like Rising Ground, that have contracts w
Harrison Edwards

A big day at the New York Stock Exchange as Rising Ground, one of New York's most innovative and respected human services organizations was given the honor of ringing the exchanges' opening bell. It was also proclaimed that today is Rising Ground Day at NYSE. Here's the moment where Jose Jarra, Esq., Chairman of Rising Grounds Board of Directors rang the opening bell. Mr. Jarra takes it all in from above. Alan Mucatel, Executive Director of Rising Ground and Board Chair Jose
Harrison Edwards

After being out of work for over a year, Maribel Valencia-Barajas has a new job as a medical assistant/medical records specialist at Westchester Neurological Consultants in Yonkers, New York. Her position is all thanks to Jobs Waiting, a federally-funded regional job training partnership which trains long-term and short-term unemployed individuals for jobs in the region’s fastest growing sectors. Valencia-Barajas is the 300th individual to obtain employment through the progra
Harrison Edwards

The Big Apple Has a Big Heart

When Margaret Prisinzano learned her students wanted to look great at their prom but lacked the financial resources to do so, the veteran educator sprung into action, in what can only be described as a modern-day fairytale. Prisinzano’s students at a special Bronx Urban Community School program run by Rising Ground, New York's fastest-growing social service organization, are among the city’s most in need—living in homeless shelters or in deep poverty. Their families can’t aff
{"items":["5e7128f0c15d9b0017db13dd","5e7128f2e9a075001798adca","5e7128f2c364c40017b407cf","5e7128f2d6c28f001775d418","5e7128f2dcd9de00174074e9","5e7128f20df59f001797c68a","5e7128f25420c50017721ed6","5e7128f206594b0018c272cd","5e7128f423a71f0017ece6fa","5e7128f45420c50017721ed9"],"styles":{"galleryType":"Columns","groupSize":1,"showArrows":true,"cubeImages":true,"cubeType":"fill","cubeRatio":1.3333333333333333,"isVertical":true,"gallerySize":30,"collageAmount":0,"collageDensity":0,"groupTypes":"1","oneRow":false,"imageMargin":32,"galleryMargin":0,"scatter":0,"rotatingScatter":"","chooseBestGroup":true,"smartCrop":false,"hasThumbnails":false,"enableScroll":true,"isGrid":true,"isSlider":false,"isColumns":false,"isSlideshow":false,"cropOnlyFill":false,"fixedColumns":1,"enableInfiniteScroll":true,"isRTL":false,"minItemSize":50,"rotatingGroupTypes":"","rotatingCropRatios":"","columnWidths":"","gallerySliderImageRatio":1.7777777777777777,"numberOfImagesPerRow":1,"numberOfImagesPerCol":1,"groupsPerStrip":0,"borderRadius":0,"boxShadow":0,"gridStyle":1,"mobilePanorama":false,"placeGroupsLtr":true,"viewMode":"preview","thumbnailSpacings":4,"galleryThumbnailsAlignment":"bottom","isMasonry":false,"isAutoSlideshow":false,"slideshowLoop":false,"autoSlideshowInterval":4,"bottomInfoHeight":0,"titlePlacement":"SHOW_ON_THE_RIGHT","galleryTextAlign":"center","scrollSnap":false,"itemClick":"nothing","fullscreen":true,"videoPlay":"hover","scrollAnimation":"NO_EFFECT","slideAnimation":"SCROLL","scrollDirection":0,"scrollDuration":400,"overlayAnimation":"FADE_IN","arrowsPosition":0,"arrowsSize":23,"watermarkOpacity":40,"watermarkSize":40,"useWatermark":true,"watermarkDock":{"top":"auto","left":"auto","right":0,"bottom":0,"transform":"translate3d(0,0,0)"},"loadMoreAmount":"all","defaultShowInfoExpand":1,"allowLinkExpand":true,"expandInfoPosition":0,"allowFullscreenExpand":true,"fullscreenLoop":false,"galleryAlignExpand":"left","addToCartBorderWidth":1,"addToCartButtonText":"","slideshowInfoSize":200,"playButtonForAutoSlideShow":false,"allowSlideshowCounter":false,"hoveringBehaviour":"NEVER_SHOW","thumbnailSize":120,"magicLayoutSeed":1,"imageHoverAnimation":"NO_EFFECT","imagePlacementAnimation":"NO_EFFECT","calculateTextBoxWidthMode":"PERCENT","textBoxHeight":0,"textBoxWidth":200,"textBoxWidthPercent":50,"textImageSpace":10,"textBoxBorderRadius":0,"textBoxBorderWidth":0,"loadMoreButtonText":"","loadMoreButtonBorderWidth":1,"loadMoreButtonBorderRadius":0,"imageInfoType":"ATTACHED_BACKGROUND","itemBorderWidth":1,"itemBorderRadius":0,"itemEnableShadow":false,"itemShadowBlur":20,"itemShadowDirection":135,"itemShadowSize":10,"imageLoadingMode":"BLUR","expandAnimation":"NO_EFFECT","imageQuality":90,"usmToggle":false,"usm_a":0,"usm_r":0,"usm_t":0,"videoSound":false,"videoSpeed":"1","videoLoop":true,"jsonStyleParams":"","gallerySizeType":"px","gallerySizePx":940,"allowTitle":true,"allowContextMenu":true,"textsHorizontalPadding":-30,"itemBorderColor":{"themeName":"color_12","value":"rgba(218,218,218,1)"},"showVideoPlayButton":true,"galleryLayout":2,"targetItemSize":940,"selectedLayout":"2|bottom|1|fill|true|0|true","layoutsVersion":2,"selectedLayoutV2":2,"isSlideshowFont":false,"externalInfoHeight":0,"externalInfoWidth":0.5},"container":{"width":940,"galleryWidth":972,"galleryHeight":0,"scrollBase":0,"height":null}}